These two collaborative events with Deirdre McLaughlin were created in 2012 and 2013. In both performance events, my live intermedial practice was employed as a tool to intersect with Deirdre’s lived experience and personal memories of temporal lobe epilepsy, as illustrated through improvised text, movement and storytelling.

The first event we created together, Transmitted Thoughts,took place in December 2012 at the Royal Central School of Speech and Drama (RCSSD), London. Transmitted Thoughts coincided with Deirdre undergoing a routine twenty-four-hour ambulatory EEG as a diagnostic tool to monitor her neurological activity. An EEG is a standard, non-invasive neurological test used in the diagnosis and treatment of epilepsy that records the electrical activity in the brain (brainwaves) through attaching a series of electrodes (small metal disks) to the patient’s head with conductive gel. These electrodes are also fixed to a series of individual wires that connect to a small machine the patient (in this case, Deirdre) wears in a belt around her waist for the duration of the test.

In response to this diagnostic event, we occupied two and a half hours of the twenty-four-hour test on the stage of the RCSSD Embassy Theatre, using that time to construct a live response to Deirdre’s real-time experience of the ambulatory EEG for an invited audience. In preparation, Deirdre provided me with a selection of images, texts and sounds related to temporal lobe epilepsy alongside documentation of her own medical history, including the prior diagnosis and treatment of her condition. During the live event, with me on one side of the performance space and Deirdre facing her across that space, the projected images I generated were often thrown onto Deirdre and a large screen hung at the back of the stage.

Employing a live feed camera, VJing software to mix video footage, a sound sampler, microphone and loop pedal, I mixed together the materials offered by Deirdre using these technologies, as well as responding to any prompts she offered. 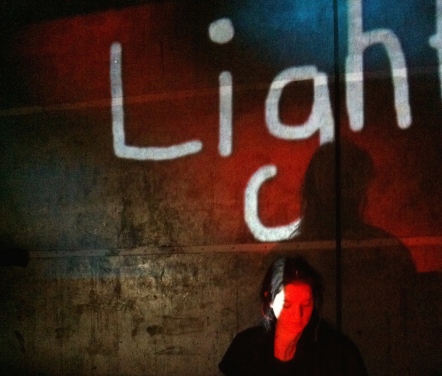 The second event, performed at Stanford University as part of the PSi (Performance Studies international) praxis session programme in June 2013, was a co-created response to the day of the ambulatory EEG, titled Transmitted Thoughts #2: Who is the Receiver? and was positioned in a space that audience members could enter and leave at will. The prompt for our live collaboration was to remember and re-enact what happened during the twenty-four hours of the EEG, using a similar set of materials as described above, as well as documentation from the day itself. During the ninety minutes, we worked hour by hour through Deirdre’s memories of the experience of undergoing the test, with Jo again responding to the prompts Deirdre offered, through activating and mixing images, texts and sounds, in a similar way to the first event.